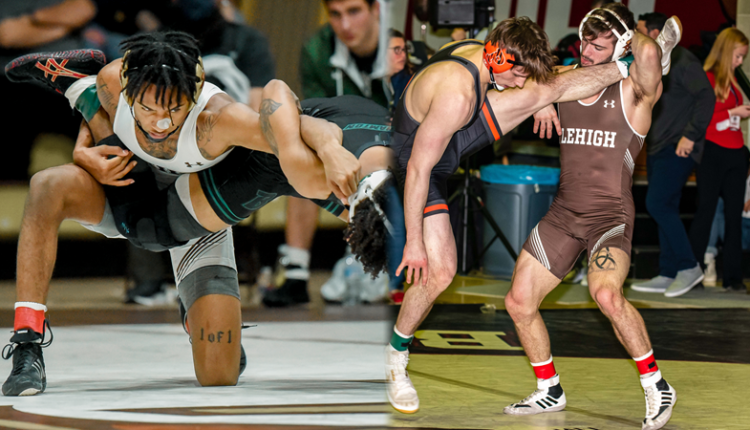 BETHLEHEM, Pa. – Lehigh wrestlers Malyke Hines and Brian Meyer earned at-large berths to next week’s NCAA Championships in Detroit as the NCAA unveiled its 44 at-large selections Tuesday afternoon. Both Hines and Meyer will be making their second NCAA appearances as their selections bring Lehigh’s total number of NCAA qualifiers to seven.

The 2021 EIWA Champion, Hines was unable to defend his title last weekend in Ithaca, NY as he recovers from an injury suffered February 11 against Princeton’s Nick Kayal. He weighed in at EIWAs and defaulted in his first round match before medically forfeiting out of the tournament. Hines enters the tournament with a 9-8 record but was 9-5 prior to defaulting in his last three bouts. He owns four victories against other wrestlers in the 33-man field at 133. Hines went 2-2 at NCAAs in 2021.

Meyer earns an at-large berth after going 1-2 at the EIWA Championships at 165. He has a 14-10 record and entered the postseason ranked 22nd in the third coaches’ ranking and with an RPI ranking of No. 9. Seven of Meyer’s 14 victories came against NCAA qualifiers at 165 including wins over then top-10 foes Jake Wentzel of Pittsburgh and Anthony Valencia of Arizona State. Meyer went 0-2 in his first NCAA appearance in 2021.

Seeds and brackets for the NCAA Championships will be announced Wednesday at 6 pm on NCAA.com.

The NCAA Championships will be held March 17-19 at Little Caesars Arena in Detroit.