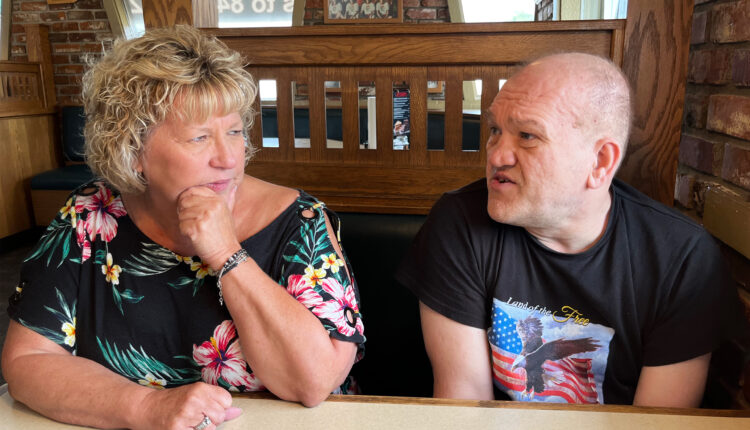 GLENWOOD, Iowa — Mike Lee’s way of life has faded away in most of the United States, and it soon will vanish from southwestern Iowa.

Lee, 57, has spent 44 years at the Glenwood Resource Center, a state-run institution for people with intellectual or developmental disabilities. He has autism and epilepsy, and his parents decided when he was 13 that he needed the structure and constant oversight offered by a large facility.

Theirs was a common decision at the time. It no longer is.

The number of Americans living in such institutions has dropped more than 90% since the late 1960s. Seventeen states have closed all their large public institutions for people with disabilities. Just five states — Iowa, Nebraska, South Carolina, Utah, and Wyoming — haven’t closed any, according to a University of Minnesota expert.

Iowa announced in April that in 2024 it would shutter the Glenwood Resource Center, a sprawling campus near the state’s western border. State leaders cited federal pressure to improve conditions for the facility’s residents or place them elsewhere.

Many of the remaining residents of such places have lived there for decades, leaving their families with wrenching choices when closures loom.

Lee knows he will move soon, even if he doesn’t understand all the implications.

His sister, Connie Bowen, broached the subject during a recent visit. She picked her brother up from the one-story house where he lives with several other residents on the institution’s grounds and drove him to a nearby Pizza Hut for lunch.

As he sipped on a root beer, she asked how he felt. “Does it make you sad or happy that you’re leaving?” she said.

Lee wore a black T-shirt decorated with a bald eagle, the American flag, and the words “land of the free, home of the brave.” He said he is looking forward to a calmer life away from the institution, where he said other residents often become disruptive.

Bowen, who is her brother’s legal guardian, agrees in theory with the idea of caring for people with disabilities in homes or apartments. But like many other relatives of Glenwood Resource Center residents, she worries that the new arrangements might not be safe for people who have been institutionalized for decades.

“I hope I can find a good place that’ll take good care of you,” Bowen told Lee.

Many residents face more hurdles than Lee does. Some can’t speak. Many also have physical disabilities that make getting around difficult and can pose life-threatening risks. Some residents can become confused or agitated.

Sheryl Larson, a University of Minnesota researcher who tracks institutional care for people with disabilities, said Iowa lags behind most other states in winding down such facilities.

The closures partly stemmed from the U.S. Supreme Court’s 1999 decision in Olmstead v. L.C., which held that Americans with disabilities have a right to live in the least restrictive setting that is practical.

Like Glenwood, most state institutions opened more than a century ago, and they typically were constructed in rural areas. “There was a movement to create a bucolic environment for individuals,” said Mary Sowers, executive director of the National Association of State Directors of Developmental Disabilities Services.

Many of the big institutions included farms, where residents helped grow their food. Conventional wisdom held that country life would be healthful. Now, Sowers said, “we recognize that the larger settings really didn’t wind up living up to that promise, and individuals are able to thrive more when they’re able to live in communities.”

Sowers said about 1.3 million Americans are served by public programs for people with intellectual or developmental disabilities. Only about 1% of them live in large state institutions.

Larson said families of the institutions’ remaining residents may feel whipsawed by experts’ advice. Years ago, medical professionals told parents that their children could best be served in such places. Now, those same families are urged to move their loved ones out. “They did what they thought was the right thing to do — and now to be told it wasn’t the right thing to do is really, really hard for them to accept,” she said.

The transition away from institutions for people with intellectual or developmental disabilities has been handled better than the wave of state mental hospital closures over the past 50 years, Larson said. Critics contend that as large state mental hospitals were shuttered, they weren’t replaced with sufficient community services. That sparked a surge in people with untreated mental illnesses living on the streets or in jails and prisons.

Facilities like the Glenwood Resource Center serve people with intellectual disabilities, such as severe autism and brain injuries. Larson said that community services for people with intellectual disabilities have increased and that surveys find most families are satisfied with the results after their loved ones move from institutions to community placements.

The Iowa closure decision came after a series of scandals at the Glenwood Resource Center. Allegations included that insufficient medical care led to several deaths and that administrators planned unethical research on residents. Top administrators were ousted, and the U.S. Justice Department began investigating as allegations of poor care continued.

Federal investigators determined that Iowa violated Glenwood Resource Center residents’ rights and that the state relied too much on institutional care.

Justice Department officials declined to comment for this article, noting that negotiations over a legal settlement with the state are ongoing.

In the scandal’s wake, Iowa leaders assured residents’ families that they had no plans to close either of the state’s two institutions for people with disabilities. But the message abruptly changed in April, when state officials announced the Glenwood Resource Center would close. They cited the high cost of complying with federal expectations if it were to stay open.

The state and federal governments spend about $392,000 per resident annually at the institution.

Kelly Garcia, Iowa’s director of health and human services, said she understands that contemplating a move can be stressful for residents and their families. But she said Iowa clung too long to an outdated role for such institutions. “This notion that you are admitted at age 2 and you live 80 years there is no longer the way we as a society would want to support a human being,” she said.

Garcia said administrators are trying to arrange for longtime roommates and friends to stay together when they move out and for people to be placed near their families.

She said the state is committed to providing money and expertise to the private agencies that will support former Glenwood Resource Center residents. She noted the state has already helped such agencies raise wages so they can hire and retain caregivers. Those that take on clients with high needs could qualify for extra payments to make the transition, Garcia said.

Garcia said the state’s commitment is one reason more than 30 agencies showed up in July for a “provider fair” in the institution’s gym. Residents’ families and guardians met with private care providers and considered their options.

Crest Services, a residential care company for people with disabilities, sent representatives to the event. Director Bob Swigert said in a recent interview that his agency is looking to arrange community placements for 10 residents of the Glenwood Resource Center. The main hurdle has been finding suitable housing for the residents, including those who use wheelchairs, Swigert said. His company might retrofit some homes for that purpose.

Swigert said he and his staff are reassuring residents’ families that they will continue to have necessary services, including round-the-clock staffing. “They’re concerned, they’re anxious — which is very understandable,” he said. “These individuals are being required to move from what has pretty much been their lifetime home.”

The institution’s 380-acre campus includes numerous ranch-style homes, where residents live with oversight from staff. It has several large old buildings, from days when people with disabilities were warehoused. It also includes a fire station, a greenhouse, a water tower, and a cemetery containing the graves of hundreds of people who have died at the institution since the 1800s.

The facility has been a vital part of life in Glenwood, a town of about 5,000 people near the Missouri River. The institution has nearly 470 workers, making it the largest employer in the area, with relatively good wages and benefits. Two or three generations of many local families have worked there.

Some may find new jobs in the Omaha, Nebraska, area, which is less than an hour away, but town leaders worry others will move away. A few may transfer to a similar institution owned by the state in the town of Woodward, which is 150 miles to the northeast.

Some of the institution’s residents will never understand the situation. One is Seth Finken, 43, who has lived at the Glenwood Resource Center since 1984. Childhood meningitis damaged his brain and left him blind, deaf, and medically fragile.

His mother, Sybil Finken, lives in the town of Glenwood and sees few options for her son in the region. The most advanced care programs she has talked to are in bigger cities, such as Des Moines or Dubuque. “This is Seth’s community,” she said. “I don’t want him moving two or four hours away.”

For years, Sybil Finken called for Iowa to keep operating the Glenwood Resource Center. She knew most other states had closed institutions for people with disabilities. She figured Iowa would follow suit eventually, but she believed assurances that longtime residents could live out their lives there.

Now, she said, all she can do is keep talking to private care agencies and hope someone figures out how to keep her son safe in a community setting.

“Seth and I are going to be the last ones out the door,” she said.