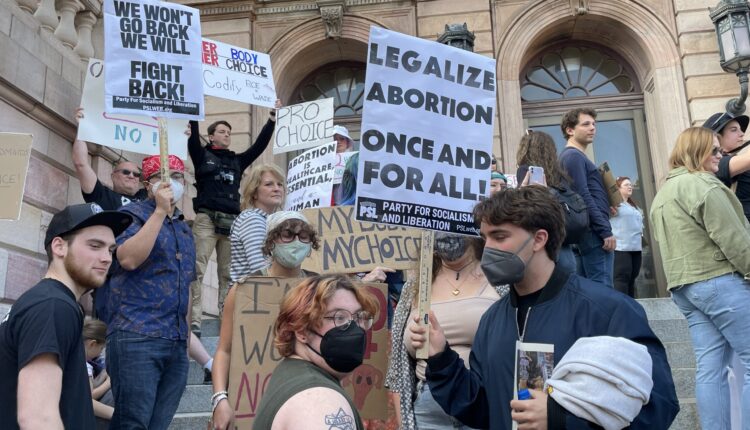 LANCASTER, Pa. – About 800 Lancaster County residents rallied at the courthouse in Lancaster city on Wednesday night to call on U.S. Sen. Bob Casey, D-Pa., to help pass legislation that would codify abortion rights into law, in response to a leaked draft document from the U.S. Supreme Court that it will overturn the landmark 1973 decision from Roe v. Wade.

Ardent cheers and interjections from the crowd peppered speeches made by local residents, healthcare practitioners, and candidates for office.

“When our right to abortion is under attack, what do we do? Stand up, fight back,” community organizer Savannah Thorpe, who’s also working for Democratic state House candidate Ismail Smith-Wade-El, told the crowd.

Dr. Laura Hatchman, a family medicine physician with Penn Medicine Lancaster General Health, expressed frustration about what she said was the medical misinformation Republicans use when describing their efforts to outlaw abortion.

“Just as I strive to provide outstanding prenatal care to women, equally important is my responsibility in helping women avoid and address unwanted pregnancy,” Hatchman said. “Most every trained physician agrees that women’s healthcare requires access to safe and legal abortion services.”

“There are some people who falsely claim that abortion harms women medically. Nothing can be further from the truth,” she continued.

“Terminating a pregnancy is as safe as a routine colonoscopy, and it’s safer than getting your tonsils out, and it’s safer than getting your wisdom teeth out,” Hatchman concluded. “Women who are able to control their reproductive health have less depression, less anxiety. Forcing women to carry out an unwanted pregnancy leads to a decrease in financial security, a decrease in safety at home, and it overall will increase that woman’s chance of mortality … The health decisions some face should not be based on other people’s religious preferences or the decisions of unelected politicians in robes.”

Claire Reiner, a registered nurse in the Labor & Delivery unit at Women & Babies Hospital, also in Lancaster, recalled her youngest patient – a 14-year-old – and her coworkers’ experiences with pregnant patients as young as 12 years old. 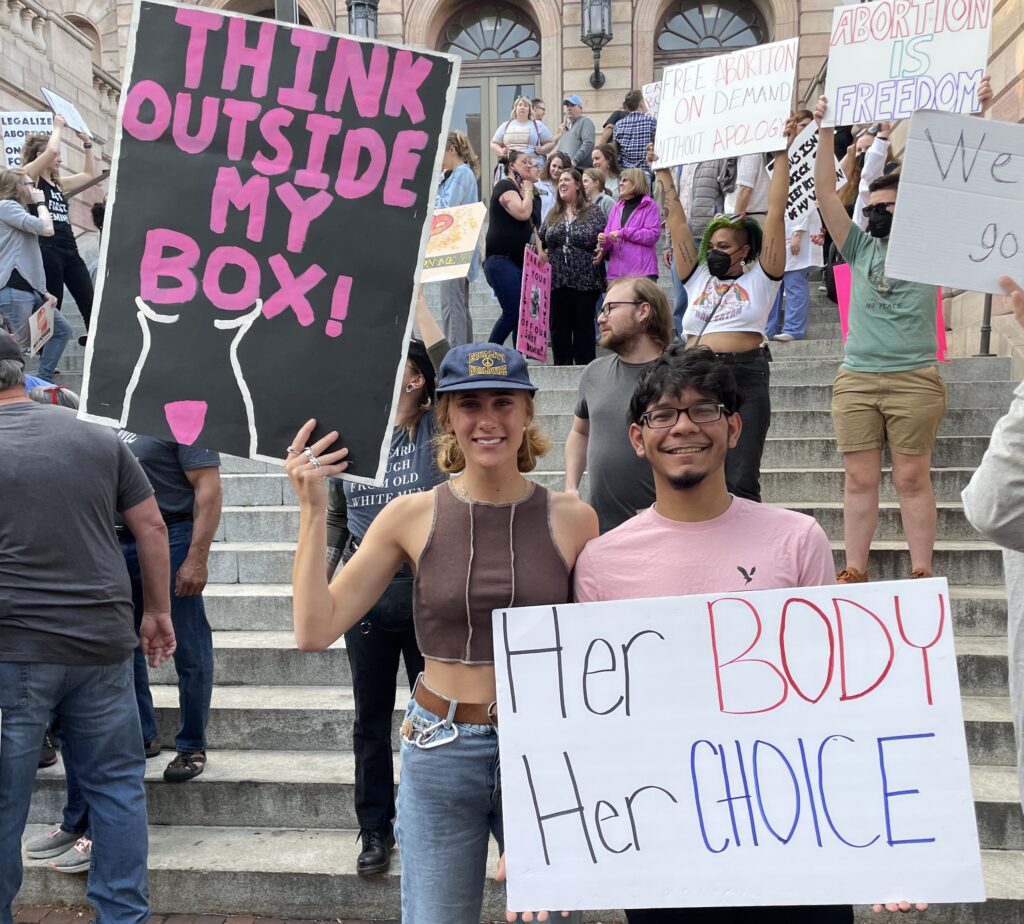 The crowd quieted when Lancaster city resident Meg Macfarlane spoke of her experiences with abortion, beginning as a 15-year-old high school student in 1962, when a classmate had an abortion, almost died, and was expelled from her school as a result. The girl’s boyfriend, she said, did not suffer the same fate.

“I think of her often,” Macfarlane said.

In 1966, while employed at an office, a coworker had to take a leave of absence when she was seven months pregnant, Macfarlane said, because her baby had died four months prior, and she experienced complications from being forced to carry it to term because doctors could not legally provide her with abortion care.

Macfarlane continued that in 1967, after giving birth at age 20, her doctor only gave her birth control pills after receiving permission from her parents – who hadn’t supported her financially since she was 17 years old – because she was unmarried, and he expressed that he didn’t want her bringing more children into the world.

“It’s not a moral issue, it’s a healthcare issue. It’s not all about pregnancy termination. It’s about sex, it’s about women having sex, and men who want to control that – how, and when, and where, and why,” Macfarlane said. “Women who get pregnant and are forced to have a child, that can affect so many other things in their life. I’m about ready to burst into tears. I want to thank you for caring about this issue … Please just keep on.”

Rally organizers Lancaster Stands Up and Bold Action Works stationed volunteers throughout the crowd with signs providing contact information for Casey, urging people to call or write to his office. Casey is one of the two U.S. Senate Democrats who have said they will not vote in favor of a law securing abortion rights.

Suzy Wurtz of Lancaster Stand Up concluded the event by addressing Casey, President Joe Biden, and the crowd.

“I want to talk directly to Senator Casey right now. We put in endless hours getting you into your elected position,” she said. “Joe Biden – we campaigned for you. Do your damn jobs.”

“I want you all to remember everyone who’s out here today,” Wurtz concluded. “Remember who you talked to, remember who you met. And remember that they are your friends in this fight. Because we are not going back.”