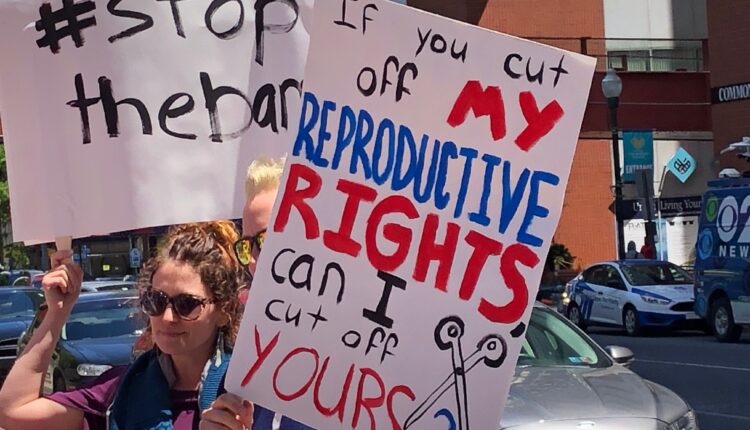 Pennsylvania is one of seven states that is most likely to see political tensions rise over abortion rights this fall if the U.S. Supreme Court, as is expected, moves to effectively overturn Roe v. Wade, according to a new analysis.

With control of the Governor’s Mansion and one highly coveted U.S. Senate seat up for grabs, the threat of abortion returning to the states could be enough to energize Democratic voters and get them to the polls in a year that’s usually unfriendly to the party in power, veteran political analyst Lou Jacobson writes in a new column for Sabato’s Crystal Ball, the politics newsletter helmed by University of Virginia political sage Larry Sabato.

Those other states on the bubble, in addition to Pennsylvania, are: Arizona, Georgia, Michigan, New Hampshire, North Carolina, and Wisconsin, Jacobson wrote.

For the last seven years, Democratic Gov. Tom Wolf, of Pennsylvania, has been a one-man bulwark against Republican attacks on abortion access, vetoing every bill that’s crossed his desk.

With Wolf leaving office next January after serving the constitutional maximum of two, four-year terms, Democrats are pinning their hopes on Attorney General Josh Shapiro, effectively the lone Democrat in the 2022 primary race, who has vowed to be a similar brick wall.

It’s not yet clear which candidate will emerge from the packed Republican primary field. But one candidate, state Sen. Doug Mastriano, R-Franklin, has made it clear he’d move to restrict abortion rights if he’s elected. And, abetted by a Republican-controlled Legislature, it’s clear that he (or any other GOP hopeful) likely could do just that.

Those are high-stakes, to be sure. But it’s still “unclear whether abortion will become a big enough motivator for Democrats to overcome the historical pattern of unfavorable midterms for the party controlling the White House, particularly if concern about the coronavirus pandemic and inflation remains high,” Jacobson wrote.

A view of the front portico of the United States Supreme Court building in Washington, DC.

Pennsylvania is one of three of those seven battleground states (Michigan and Wisconsin are the other two) where support for legal abortion in “most or all cases” has consistently run between 51% to 54%, Jacobson writes, pointing to polling data compiled by the Pew Research Center.

That lack of public support hasn’t proven an impediment for Republicans, who, as noted above, have launched broadside after broadside against abortion rights during the Wolf era. 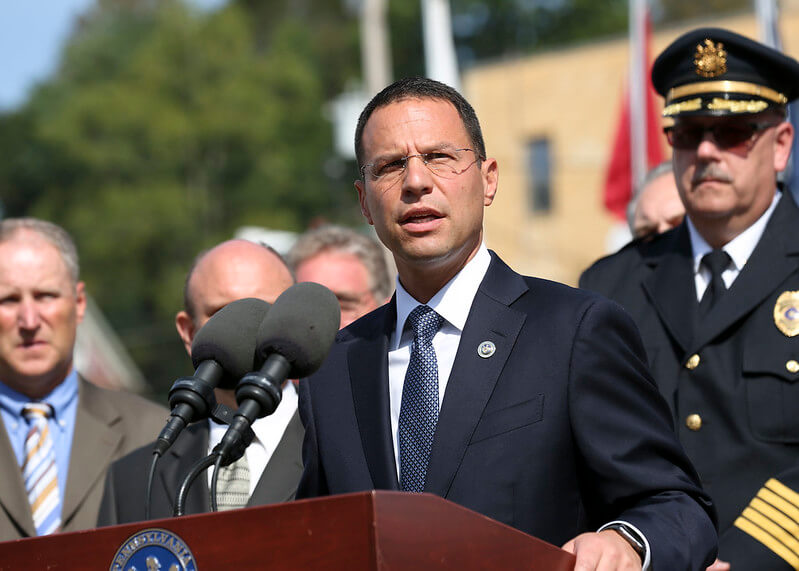 Looking at the issue from a sheerly political point of view, Democrats are headed into the 2022 cycle with some political disadvantages, notably President Joe Biden’s sagging approval ratings and skyrocketing inflation.

And those frustrations could well “overwhelm any gains Democrats get from voters being energized by an overturning of Roe” (which still remains  hypothetical — at least for now), Jacobson wrote.

Jacobson’s conclusion was buttressed by veteran Muhlenberg College pollster and political analyst Chris Borick, who said he’s “skeptical that the boost [Democrats] would get would offset the cyclical advantages that the GOP carries into the midterms here.”

So what’s the silver lining for Democrats here? Here’s a hint — it runs through Bucks County.

“Perhaps the most promising avenue for Democratic gains is that abortion politics could energize the same types of voters that Democrats have increasingly been winning: suburbanites, including women, who a decade or two ago might have voted Republican,” Jacobson wrote.

Our Stuff.
In a special report, two years in the making, Brittany Hailer, of the Pittsburgh Institute for Nonprofit Journalism, tells the story of the 13 people who have died in custody at the Allegheny County Jail.

Almost one year after a statewide panel released a final report on Pennsylvania’s juvenile justice system, a bipartisan pair of lawmakers have announced plans to improve outcomes for youth and communities, Marley Parish reports.

Senate Democrats and immigration advocates are pushing the White House to end a controversial Trump-era immigration policy enacted during the pandemic that allowed U.S. officials to expel migrants and asylum seekers at the border, Capital-Star Washington Reporter Ariana Figueroa writes.

Members of Philadelphia City Council, joined by law enforcement and advocates, recently spent some time delving into the links between gun violence and domestic violence, our partners at the Philadelphia Tribune report.

On our Commentary Page this morning: The trial is done. What’s next for school funding in Pennsylvania? Opinion contributors Fletcher McClellan and Kory Trout take up the question. And if we want to build a better America, we need to ensure everyone who needs health care can get it, Laura Packard, a health care advocate and cancer survivor, writes in a column first published by our sibling site, Colorado Newsline. 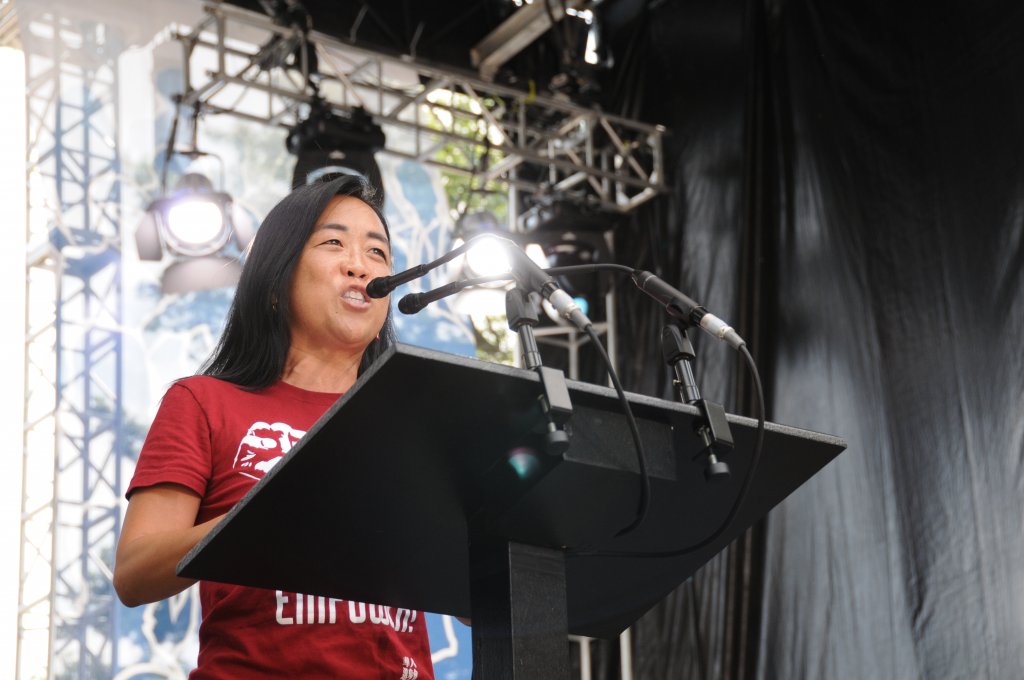 In a forum Monday, there was plenty of common ground among Democratic hopefuls for Pittsburgh’s new 12th Congressional District, the Post-Gazette reports.

Pennsylvania has the second-largest Ukrainian population in the United States, PennLive reports.

Former Pennsylvania Attorney General Kathleen Kane has been charged with DUI in her hometown of Scranton, Spotlight PA reports (via the Morning Call).

USA Today’s Pennsylvania Capital Bureau wants your questions for the 2022 candidates for governor and U.S. Senate.

Jury trials are on the rise in Philadelphia as the city courts system moves to clear a 34,000-case backlog, WHYY-FM reports.

StateImpact Pennsylvania walks readers through what it’s like to own an electric vehicle in the Keystone State. Two words: Range anxiety.

Erie’s Tall Ships Festival returns this spring. GoErie has what you need to know about ticket sales and everything else.

City & State takes a look at the state’s political topography as the spring campaign season gets underway.

PoliticsPA considers whether a woman or a person of color can win statewide this year.

You Say It’s Your Birthday Dept
Best wishes go out this morning to reader Harvey Freedenberg, of Dauphin County, who celebrates today. Congratulations and enjoy the day, sir.

Heavy Rotation
Here’s a pure pop gem from Fountains of Wayne for your Tuesday morning. From their self-titled freshman LP, here’s ‘Radiation Vibe.’

To build a better America, ensure everyone who needs health care can get it | Opinion