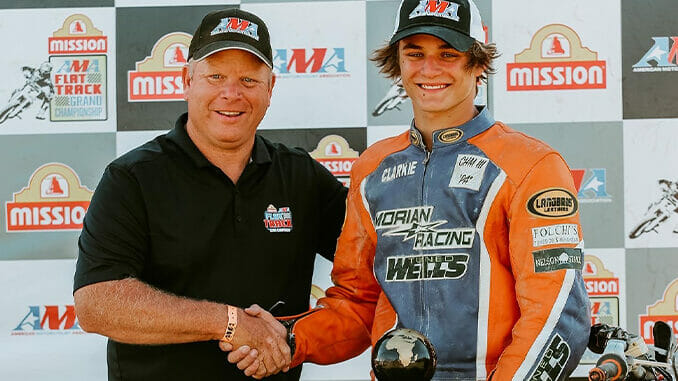 This is a press release from the AMA…

These outstanding flat-track competitors, along with the Vet/Senior and Youth Racers of the Year, were selected from riders who participated in the event, which took place at the DuQuoin State Fairgrounds in Du Quoin, Ill., June 7-13. They were among the 23 AMA amateur national champions crowned during the seven days of bar-banging action.

“The AMA is proud to present Clarke Morian and Declan Bender with our two most prestigious awards for amateur flat track racing,” said AMA Track Racing Manager Ken Saillant. “Both Clarke and Declan are great riders and competitors. Clarke is a very grounded, hardworking and well-focused kid, and as a racer he’s fast, smooth and clean on the track. Declan isn’t just fast on the racetrack, but he’s even better in the classroom, an outstanding student who’s earning straight As in Advanced Placement classes.” 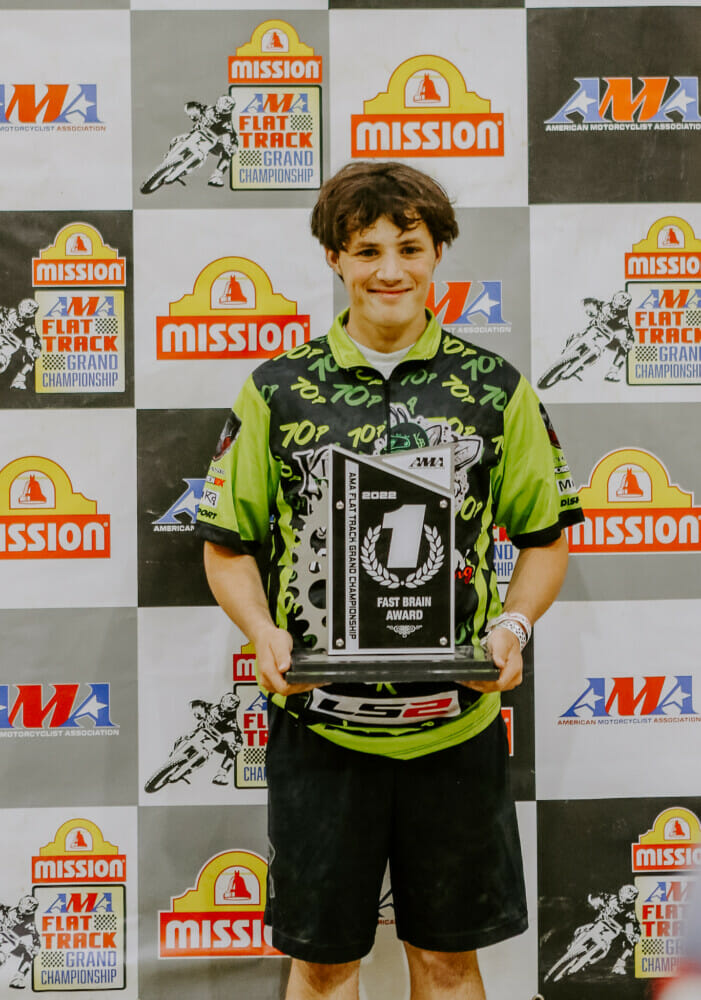 Morian started racing just six years ago and got his first taste of bar-banging action at the Lawrenceburg Motorcycle Speedway, where he got second place aboard a borrowed Honda XR100. Since then he’s won the Half-Mile in the 250cc Modified class at the 2020 AMA Flat Track Grand Championship and at this year’s event showed excellent consistency with multiple top-five finishes.

“I decided to go for the award just a couple months ago,” Morian said, “[because] I wanted to be a part of that legacy that Nicky Hayden started. I’m proud to be a part of something this big in the flat track community. I have to thank my mom and dad, who’ve put in countless hours helping to get me to this point, and Chad Wells my motor guy, who puts in countless hours, as well.”

Declan Bender, who was presented with the 2022 Bill Werner AMA Fast Brain Award, started riding at the age of 3, and began his racing career on Yamaha PW50s. Since then he’s won 12 National Championships, three district titles, and previously won the Fast Brain Award in 2015. At this year’s Mission Foods AMA Flat Track Grand Championship, he took second in the 450cc A Production class and fourth in the Open Heavyweight class.

“It was definitely unexpected to win the Fast Brain Award,” Bender said. “I was excited to win it, especially because it was presented to me in front of the younger racers. I help a lot of little kids out racing, and some of them look up to me, so the presentation was perfect.”

“I’d also like to thank my mom and dad,” Bender continued. “They’re always behind me and in my corner, and they do everything to get me to the races. Tyler Raggio was my mechanic throughout the week, too, and he did a lot for me. I have so many people who help me out, and I’m very thankful.”

The Bill Werner AMA Fast Brain Award includes a $1,500 educational scholarship and is presented to a racer who understands—and demonstrates—that academic excellence is just as important as good performance on the racetrack. The AMA thanks AMA Motorcycle Hall of Famer Bill Werner, Estenson Racing, and Zanotti Racing’s Dave Zanotti for funding this award in 2022.

Click here for all the latest Flat Track racing news.