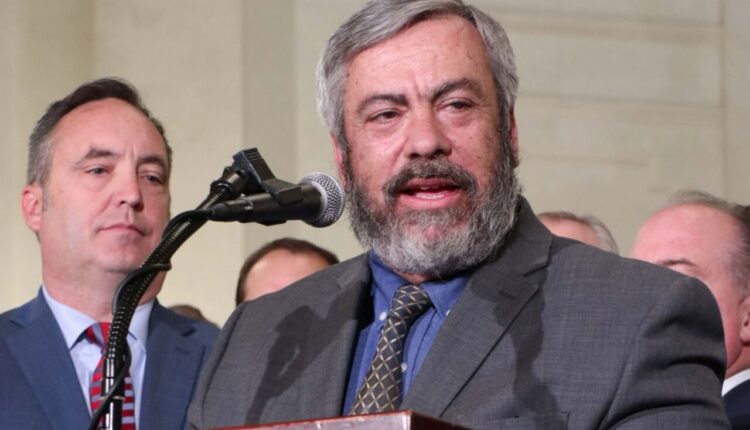 A top Pa. Senate Republican has a primary. Who’s running against him?

Sen. Pat Browne may be the Lehigh Valley’s most powerful elected official in Harrisburg, but he’ll find himself in unfamiliar territory this May – a contested primary.

In the May 17 primary, Parkland School Board Director Jarrett Coleman is looking to unseat Browne, who has represented the Allentown area as a state senator from the 16th District since 2005.

Browne, chair of the powerful Senate Appropriations Committee and a member of the Senate Republican leadership, hasn’t faced a conservative challenger in the 21st century.

His first Republican opponent will be a relative newcomer. Coleman, a JetBlue pilot from Upper Macungie Township, was sworn into office in December. He won that race by building a campaign around criticism of the Parkland School District’s response to the COVID-19 pandemic. Coleman argued that by forcing children into remote learning and then mandating masks for in-person classes, the district was robbing families of their ability to make decisions.

When the Parkland Area School District adopted a policy in February allowing the superintendent to make masks optional, Coleman was the only school board director to vote against the plan. “I don’t want any part in any type of plan that suggests masks should be placed on children’s faces. The only time I’ll be voting on this is to end this tiered program,” he said before the vote.

During the campaign for school board, Coleman railed against school administrators and incumbents, saying they had introduced critical race theory into the district by disguising it as a Diversity, Equity and Inclusion Program. He vowed to remove both CRT and DEI once elected.

Coleman has yet to create a new website or social media page outlining his goals or platform in the Senate race. However, the Lehigh Valley Tea Party, which helped him gather signatures to make the Republican primary ballot, has promoted his campaign on Facebook, saying, “It’s time to get rid of the RINOs in Harrisburg and put true conservatives into office.”

It’s not the first time Browne has drawn fire for angering some within the Republican Party. In 2014, he and state Sen. Bob Mensch were the subject of a censure vote by the Lehigh County Republican Committee. The two legislators bucked their party when they opposed an amendment that would have made it harder for public sector unions to collect dues and fees from government employees’ paychecks.

But while some conservatives may grumble about Browne’s bona fides, his record as a moderate fiscal wonk has earned him admirers – and votes – from across the political aisle.

Browne, 58, of Allentown, has carried the district for years even though Democrats outnumbered Republicans 53% to 44.8% before redistricting this year, according to the website Dave’s Redistricting.

Browne’s signature accomplishment in office has been the creation of the Neighborhood Improvement Zone. Under state law, developers who take on projects in portions of Allentown’s Center City can use state and local taxes to finance debt service. This allowed developers to charge rents below market rate and attract businesses and economic growth to the downtown.

Supporters have praised the program, which is exclusive to Allentown, for revitalizing the city and reversing decades of urban decay. The NIZ is credited for the construction of the PPL Center and the Strata complexes in the downtown. Critics contend the program has brought in wealthy residents and deepened the pockets of a few developers but done little to help struggling families living just a few blocks away.

At the same time, Browne has largely supported Republican causes without provoking Democrats in the district. He opposed Gov. Tom Wolf’s 2022 budget proposal, saying the nearly $4 billion spending hike was irresponsible. He also supported legislation that would have rolled back mail-in voting; like every other Republican state senator, Browne supported the expansion of mail-in voting in 2019. However, he turned against the law after it drew criticism from President Donald Trump and his supporters.

Browne is a co-sponsor of a recent bill that would require persons delivering mail or absentee ballots to deliver such ballots only at their county’s primary office, located in the county seat.

Similarly, Browne has backed efforts to limit gun control in Pennsylvania. Earlier this year, he joined every Republican in the Senate and three Democrats in voting for House Bill 979. The bill, which was vetoed by Wolf, would have given gun owners and organizations greater standing in court to challenge local laws restricting firearms. Municipalities are prohibited from passing gun control laws that are stricter than state standards, but many Second Amendment activists contend some locales ignore this.

Browne has also been a breadwinner for the region. His seat on the Appropriations Committee has allowed him to funnel millions of dollars to the Allentown School District, local programs supporting the arts and potential tourism draws. He’s also helped secure tax incentives that helped make Lehigh Valley International Airport an Allegiant Air hub.

While Browne, as an entrenched incumbent, would be expected to have a leg up in fundraising, it was not immediately clear who has the larger war chest.

While Coleman will need to introduce himself to most Republican voters, many of them won’t know Browne, either.

This year’s redistricting process reshaped the district, ditching much of Allentown and picking up the northern half of Bucks County. The district as a whole is now 52.7% Republican and 45% Democrat, a near flip of the 2020 registration numbers.

That should give the winner of the Republican primary an advantage in the general election, where they’ll face Lehigh County Controller Mark Pinsley. Pinsley, a South Whitehall Township Democrat, is the only candidate to come close to defeating Browne in his five senate races, losing by 3 percentage points in 2018.

Tom Shortell is a reporter for Armchair Lehigh Valley, a publishing partner of the , where this story first appeared.