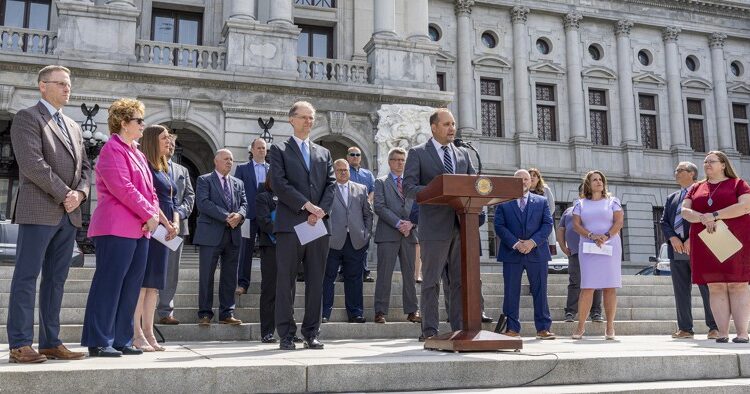 The Commonwealth Court may have temporarily halted the Pennsylvania Department of Transportation’s plan to toll nine bridges across the state, but a collection of lawmakers, activists and local government officials rallied at the state Capitol Wednesday to call on Democratic Gov. Tom Wolf’s administration to pull the plug on the initiative once and for all.

The rally, organized by the No P3 Bridge Tolls Coalition, focused on the Wolf administration’s plan to toll nine bridges as part of a statewide plan to generate revenue for bridge replacement and improvement projects. Opponents said Wednesday that the plan will have grave economic consequences for the state and its motorists, and that the plan’s approval by PennDOT’s Public-Private Transportation Partnership Board lacked transparency.

“The process for adding the tolls to the interstate bridges was mired in a lack of transparency, a lack of citizen input and a lack of legislative oversight. It has been a sloppy, closed process that sets the precedent for more tolls in the future,” said Sen. Scott Hutchinson, R-Venango, who added that tolls will result in higher costs to motorists, employers and communities.

“This illegal and unconstitutional tolling plan is a declaration of war against the economy of all Pennsylvania,” Hutchinson said.

Senate Transportation Committee Chairperson Wayne Langerholc, R-Cambria, who sponsored legislation to block the bridge tolling plan, said the transportation panel advanced the tolling proposal “at a time when our legislature had been elected but not sworn in, and couldn’t really push back.”

The tolling plan also received pushback from business leaders, including Rebecca Oyler, the president and CEO of the Pennsylvania Motor Truck Association, who said that tolls will place an added burden on companies already grappling with inflation and supply chain struggles.

Pa. to get $1.6B in new bridge funding from feds, though toll plans still on amid funding shortfalls

The department’s tolling plan was halted by the Commonwealth Court in May via an injunction that prohibits the state from moving forward with plans to toll, or begin construction, on any of the bridges outlined by the P3 Board.

Alexis Campbell, a spokesperson for PennDOT, said the department welcomes conversations with the General Assembly on ways to generate new revenue for transportation projects, noting that the state’s gas tax “is no longer a dependable source of funding to meet all bridge and highway needs in this commonwealth.”

“To date, the Legislature has failed to offer any solutions beyond their approval of the P3 initiative that will assist the administration’s desire to phase out the gas tax,” Campbell added.

Wolf convened a bipartisan panel last year to study alternatives to the gas tax in Pennsylvania, arguing that the tax has become an unreliable source of funding due to increased vehicle fuel efficiency and an industry shift toward electric vehicles. Lawmakers have yet to act on any of the proposals recommended by the commission, including a user fee for miles traveled, a fee on package deliveries and an electric vehicle fee.

KHN’s ‘What the Health?’: Taking a Shot at Gun Control